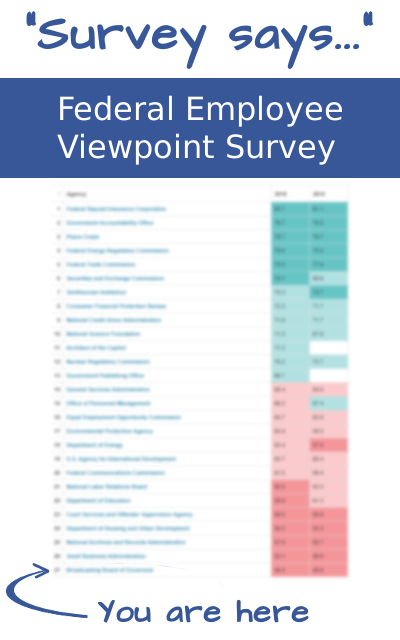 Just days after the release of the results of the 2017 Federal Employee Viewpoint Survey, the Broadcasting Board of Governors with much fanfare held its awards ceremony. The ceremonies included a color guard, lots of smiling and non-smiling denizens of the bureaucratic structure and at the end, some light refreshments.

The union was glad to see that several bargaining unit employees received much-deserved awards. Some other award winners, particularly from management. were puzzling, if not downright troubling.

The results of the 2017 Federal Employee Viewpoint Survey – our Agency management’s annual report card – showed that several agency areas received nothing but failing grades. These units failed in ALL categories across the board.

Preliminary analysis shows that the work units listed below are the absolute worst of the worst and where the management represents spectacular failures, according to the only report card management officials receive – the annual FEVS results. Here are the ten worst units in the building ranked in order starting with the very worst workplace:

If the union may be so bold as to ask: Why did any management official in the worst performing work units listed above receive an award? For what, pray tell? What were the criteria for the Agency award? It’s a travesty that managers from the worst managed units (as identified in the FEVS) are rewarded for anything. These undeserved awards have an immediate and depressing impact on employee morale. Wouldn’t it make sense that ONLY those managers with higher-than-average results in the FEVS survey should even be considered for an award?

We might add that any reward to undeserving managers in this or any other federal agency comes from the pocket of the already beleaguered U.S. taxpayer.

The Union suggests that the members of the Awards Coordinators and Planning Committee should be instructed to automatically reject any award for a management official in a work unit that received a failing grade in the evaluated FEVS categories.

Our sources tell us that upper management considers employee morale as a yawn item, ranking in importance somewhere below their daily decision as to where to have lunch. That’s why they don’t take the pesky issue seriously. The upper bureaucracy, ensconced in their comfy suites in the Cohen building, seemingly don’t give a fiddle about the survey results and wish the FEVS would just go away.

Otherwise, how could higher management allow the chief of one of the very worst work units in the building to be rewarded with a quality step increase? Demonstrably failed managers should not be allowed to receive outstanding ratings.

By allowing this, the Agency turns the entire ritual into a Kafka-esque burlesque.

You know it and we know it as well: Morale will never improve in an Agency where bad management performers are not held accountable for the miserable morale in their work units but instead are rewarded and celebrated for their abject failures.

Looking for something in our pages? Search here: