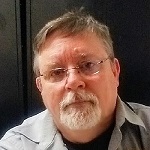 Dave Allison is retiring from the Voice of America effective June 30, 2018. Dave served as the General Vice President of AFGE Local 1812 since March 2014. Before that he served as the Local’s Head Steward and as a Steward.

Dave worked for the Voice of America as a television studio technician and helped the Local with his audio/visual skills.

Most significantly, Dave served on the negotiating team for the latest Negotiated Labor-Management Agreement (NLMA) which the Union just signed on June 7, 2018. The grueling negotiations lasted years and Dave was instrumental in presenting the employees’ positions. Those who took part in the negotiations will always remember “Dave’s analogies” in which he skillfully poked holes in many a management argument.

Dave remains General Vice President until the end of his term which ends June 30, 2018. He will remain a member of AFGE Local 1812 as a retired member.

We thank Dave for all his contributions and wish him well in his retirement.

Looking for something in our pages? Search here: